Johnson documented his stay at the Memorial Health hospital in Savannah, Georgia on social media Saturday, sharing photos and stories from his visit.

“I surprised the children at Savannah’s Pediatric Specialty Ward aaaaand look at the concentration on lil’ Aiden’s face!,” the actor wrote on Instagram captioning a photo of himself giving a fist bump to a young patient in a hallway.

“We shot #BAYWATCH scenes at Memorial Health Hospital and thought I’d pop up to the ward,” Johnson continued. “Awesome experience and THANK YOU to all the hard working and caring staff who helped make this visit possible. To all the kids I met – you guys keep smiling and staying strong. All the mamas and daddy’s I met, y’all stay strong too.”

In a separate post, Johnson described his meeting with an older teenaged fan and how he was able to relate to the boy’s mother as a parent himself.

“I got word from my team that there was a mom who was pleading with our production staff, that I go upstairs to her son’s room to give him a much needed big surprise,” he captioned a photo of himself meeting with patient Christopher and his mom inside his hospital room.

“I walked in and his smile lit up the room! And I mean lit that room up!;),” Johnson said of the surprise meeting. “We talked for a while about his family, his school and how hard he’s working to eventually graduate AND we talked about how COOL all his scars are from his multiple surgeries – from his head to his chest – those scars are badges of honor and the reminder of how beyond tough this kid is.”

“Right before I left his mom looked at him and said, ‘Christopher, I can’t give you anything, but I’m so happy I could give you this today…’ and she started to breakdown, which was captured in this pic. Made me think to give so much credit to these parents who would do anything to take their kid’s pain away and ANYTHING to bring a smile to their faces. As a papa bear I understand.”

Until then, Johnson will next be seen returning to the squared circle for WWE’s annual sports-entertainment extravaganza, “WrestleMania 32,” on April 3. 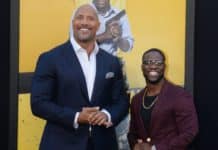