The three-time Pulitzer Prize winner was heralded as a “wunderkind” in the early 1960s when his “Who’s Afraid of Virginia Woolf” — probably his best-known work — debuted on Broadway in 1962 and won a Tony Award for best play. Director Mike Nichols brought the story to new audiences in 1966 with the Oscar-winning movie starring Elizabeth Taylor and Richard Burton.

Born March 12, 1928, Albee was adopted shortly thereafter and grew up in Larchmont, N.Y.

An unconventional student, Albee attended several schools, including The Choate School in Wallingford, Conn., from which he graduated in 1946, and Trinity College in Hartford, Conn., from 1946 to 1947.

Albee had a strained relationship with his adoptive parents. He left home as a young man and moved to Greenwich Village, holding various jobs to support himself while he worked at his writing.

“The Zoo Story,” his first one-act play, written in 1958, was first staged in Berlin, translated into German. His subsequent work included “The Sandbox” and “The American Dream,” one-act plays that helped establish his reputation as a playwright and observer of American mores.

It was “Who’s Afraid of Virginia Woolf,” his first full-length play, that brought him the most notoriety. The story of a middle-aged professor and his wife, who insult and humiliate each other during a night of drinking with a younger couple, shocked audiences with its raw language and dark humor.

Among his numerous other awards, Albee was the recipient of the National Medal of Arts in 1996, and in 2005, a special Tony Award for lifetime achievement.

Albee continued to write well into his later years.

His longtime partner, sculptor Jonathan Thomas, died in May 2005. 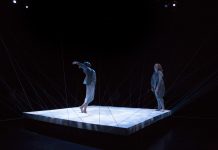 Review: ‘Not One Drop’ at Plan-B Theatre satisfying, challenging