Jan. 6 (UPI) — Beloved celebrities Ellen DeGeneres and Tom Hanks were honored respectively with the Carol Burnett Award and the Cecil B. DeMille Award at the Golden Globes gala in Los Angeles on Sunday night.

“She risked her entire life and her entire career in order to tell the truth and she suffered greatly for it,” McKinnon said of DeGeneres, who was one of the first high-profile celebrities to come out publicly as gay.

“Of course, attitudes change but only because brave people like Ellen jump into the fire to make them change. And if I hadn’t seen her on TV, I would’ve thought: ‘Oh, I can never be on TV. They don’t let LGBTQ people on TV,'” McKinnon said.

DeGeneres then accepted her award, paying homage to Burnett, the comedian for which the award was named.

“There’s a connection when we watch someone on TV for as long as we are on TV, and that’s what it was like for me with Carol Burnett,” DeGeneres said. “I felt like I knew her. I felt like she showed us who she was every week. She was larger than life. We counted on her to make us feel good and she delivered every single week.”

Hanks was fighting a cold when he accepted his award for career achievement in cinema from actress Charlize Theron.

“A man is blessed with a family sitting down front like that,” he said, referring to his wife Rita Wilson, three sons, a daughter and daughter-in-law — who were in the audience to cheer him on.

“[Rita is] a wife who is fantastic in every way, who’s taught me what love is. Five kids who are braver, stronger, and wiser than their old man is, a loving group of people who’ve put up with me being away for months at a time. I can’t tell you how much your love means to me.” 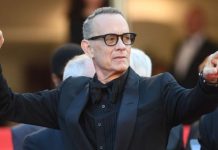 Tom Hanks announces first novel will be published next year