Us Weekly reported Chmerkovskiy broke the news while referring to Andrews in a Fox 5 television interview as one of his favorite, former dance partners and someone who “maybe just got engaged.”

He smiled as he said it, explaining that revealing the secret was “payback” for when Andrews accidentally disclosed Chmerkovskiy’s fiancée — and DWTS co-star — Peta Murgatroyd was pregnant.

Andrews, a popular television sportscaster, initially sparked online engagement speculation last week by tweeting an image of a weather report in Wisconsin, with the caption, “This weather at Lambeau is really going to put a damper on my ring game @jarretstoll.”

Andrews did not directly answer fans who wanted clarification regarding the ring reference, but she did respond with kissy-face emojis and hearts, Us Weekly noted. 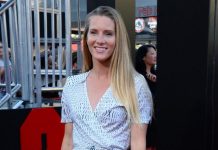 ‘Dancing with the Stars:’ Heather Morris gets the boot after perfect score 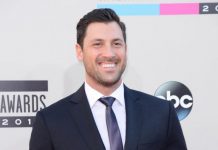 Maksim Chmerkovskiy: ‘I’ll give it my all’ to return to ‘DWTS’ this season