Ward is best known for her role as Teddy Reed Sorenson in “Sisters,” which ran on NBC from 1991 to 1996, and as Stacey Warner in the TV series “House,” starring Hugh Laurie.

The actress has been seen on the big screen as well in “The Fugitive,” starring Harrison Ford (Ward played Ford’s murdered wife), “The Day After Tomorrow,” “Gone Girl” and most recently “Independence Day: Resurgence” as the president of the United States.

Gephardt Daily Film Critic Tony Toscano chatted with the actress, via satellite, for an exclusive interview.

Peering man in Taylorsville turns out to be wanted fugitive 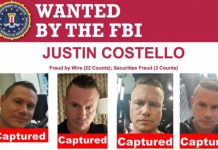