“It’s with a heavy heart that we can let you know our beloved Wrangler Jane, Melody Patterson passed away today. Our hearts are sad today. RIP Sweet Melody. We love you,” Storch posted Friday.

The Hollywood Reporter said details regarding the cause of her death were not immediately disclosed, but she reportedly had been in poor health since she broke her back several years ago.

The California native also appeared in the films The Angry Breed and The Cycle Savages, as well as on the TV series Hawaii Five-0. 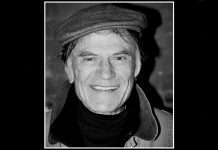