Jan. 15 (UPI) — Finneas took the stage during a musical guest spot on “The Late Show with Stephen Colbert.”

The 23-year-old singer-songwriter and music producer performed his single “Can’t Wait to Be Dead” during his debut on the CBS late-night show Thursday.

Finneas and his band performed in what appeared to be an abandoned warehouse. Finneas sang and played guitar while facing a large American flag hanging from the ceiling.

Finneas released “Can’t Wait to Be Dead” in October. In the song, Finneas expresses his love-hate relationship with the Internet during the COVID-19 pandemic and the 2020 presidential election.

“I’m happy for this song to mean anything to anyone who listens to it, but to me, it’s a song about my relationship with the Internet. Especially in an election year. Especially during a pandemic,” Finneas said in a statement.

Finneas performed “What They’ll Say About Us,” a song inspired by actor Nick Cordero’s battle with COVID-19 and the 2020 Black Lives Matter protests, on “Good Morning America” earlier this week.

Finneas, the brother of singer Billie Eilish, released his debut EP, “Blood Harmony,” in 2019. He and Eilish are both nominated for awards at the 2021 Grammy Awards, which were recently rescheduled for March 14. 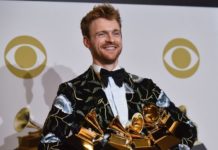 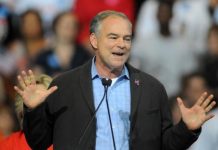