LODZ, Poland, Sept. 3 (UPI) — A lost diamond ring expected to be worth around $100,000 has been found and delivered back to Paris Hilton.

According to reports, a Polish firefighter discovered the ring on the floor of a private airport shuttle and after some investigation by the airline, returned it to the hotel heiress.

Hilton had been traveling from Poland to Ibiza to host parties as part of her Foam and Diamonds tour. The large ring was reportedly returned to her two days after losing it at the airport.

The unnamed firefighter allegedly brought the ring to a flight attendant, believing it to be theirs. Several hours later, the airline contacted Fashion Week reps and asked if anyone had lost a ring. 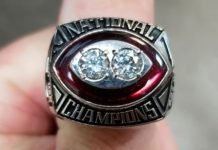