Jan. 8 (UPI) — Writer-actress-producers Fran Drescher and Rachel Bloom announced Wednesday they are working on a Broadway musical based on Drescher’s beloved 1990s sitcom, “The Nanny.”

“‘The Nanny Musical’ Broadway Bound! Go online it’s all over the news! @cancerschmancer @nbcindebted #thenannymusical #indebted #bethechange #detox,” Drescher captioned a throwback photo of her with the late Elizabeth Taylor, a 1996 guest star on “The Nanny.”

Producers Brian Zeilinger and Scott Zeilinger said in a press release that the musical will feature a book written by Drescher and her ex-husband, Peter Marc Jacobson, with lyrics by Rachel Bloom and music by Bloom and Adam Schlesinger.

“So excited that I can finally talk about this!” Bloom tweeted, along with a link to a news report about the development.

“Beautiful: The Carole King Musical” director Marc Bruni is on-board to helm the show about an outspoken, working-class woman who becomes the caregiver for the children of a wealthy widower.

No casting has been announced for the stage production yet.

Bloom is best known for creating and starring in the musical dramedy series, “Crazy Ex-Girlfriend.” 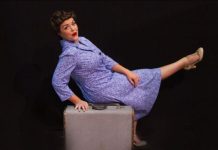