“The love of my life & the most wonderful man who has ever lived is gone,” DeeDee wrote on Instagram. “I am heartbroken.”

A prolific actor with 172 IMDB credits, Sorvino was a singer and stage actor before delving into film and television. His ’70s films include “Where’s Poppa?,” “The Panic in Needle Park,” “The Day of the Dolphin” and “The Gambler.”

Roles in “The Rocketeer,” “The Firm,” “Nixon,” and “Bulworth” ensured audiences recognized him whenever he showed up. That included the younger audience who saw him as the Capulet patriarch in “Romeo + Juliet” or kids who saw him as the bad guy in “See Spot Run” or heard his voice in “Hey Arnold!”

Sorvino continued acting through 2021 on the EPIX drama “Godfather of Harlem.” He has other projects listed in post-production.

Sorvino’s three children, Mira, Michael and Amanda, are also actors. Mira won the Academy Award for her role in “Mighty Aphrodite” and recently starred on the Starz horror-comedy “Shining Vale.” 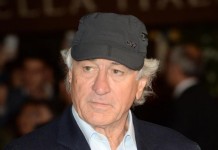