April 18 (UPI) — The cast of “Guardians of the Galaxy Vol. 2” appeared on “Jimmy Kimmel Live!” Monday to test their knowledge of each other in a game of Guess the Guardian.

The game, loosely based on “The Newlywed Game,” featured the Guardians crew equipped with whiteboards as they wrote down who they thought matched a random fact that Kimmel would reveal. Correct answers would award the actors bags of ice.

Surprises came as the cast learned that Bautista collected lunchboxes, that Pratt had given his teacher concrete and said it was from the Berlin Wall, that Russell chopped off the tip of his finger to romance a neighbor and that Rooker lost his virginity inside a pup tent.

The biggest shock came when the group was asked who created stink bombs as a child with most the cast incorrectly guessing that it was Rooker when it was in fact Saldana.

“I was 12 and I was, you know, trying to get kids to like me,” the actress said. “So, I did it. I got away with it twice and then the third time I got suspended for two weeks. It was awful. It was fun making them.”

Also on the late night show, Pratt said that Sylvester Stallone is in the movie.

“I don’t know exactly what I can say,” Kimmel said, “I know there are reveals and there are secrets, and like, for instance, can I say Sylvester Stallone is in the movie? Is that OK to say?”

Directed by James Gunn, “Guardians of the Galaxy Vol. 2” arrives in theaters May 5. 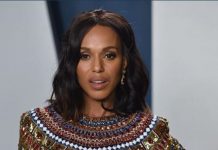