While speaking with People magazine at the Screen Actors Guild Awards Saturday, the ‘Game of Thrones’ star announced her involvement with the ‘Force Awakens’ sequel and how exciting it was originally to be offered the role.

“I was very over excited. I made no secret of the fact that I really campaigned for the part for a long time,” Christie said on the red carpet. “And then I was delighted when J.J. Abrams wanted to have me in the film and then wanted to cast me in this role that had originally been designed for a man.”

“I will be in the next Star Wars movie. I think that’s an exclusive, actually,” she continued.

Christie’s Star Wars character ‘Captain Phasma,’ was last seen being captured and thrown into a trash compactor by ‘Han Solo’ (Harrison Ford) and ‘Finn’ (John Boyega) before the destruction of the Star-Killer base. This lead many fans to question whether or not the character would return for the sequel.

When asked about her experience donning the chrome plated stormtropper outfit, Christie commented on how “striking” it looked and how the role encourages diversity in Hollywood.

“I thought the costume was incredibly striking. I also just liked this notion of a female stormtrooper,” the 37-year-old said. “I felt it encouraged diversity and it was doing something new and it was an interesting bit of casting for women, and I hope that in something that was such a mainstream success it would breed more of those kind of opportunities for other women.”

‘Star Wars: Episode VIII’ is due in theaters Dec. 15, 2017 after being pushed back seven months from its original release date. 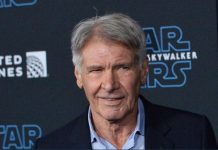