“I have been retired for the last two years and I say: ‘Oh, no, children, I don’t think I can be in your play. I don’t think I can do this television series.’ First of all, I’ve done it. And I want to enjoy my life and my children. I just love being at the phase that I’m at now. … Sometimes I say: ‘No, I’m not going to be in this play and give you every last ounce of myself. I’m saving it for me and my family,'” the actress told UPI with a laugh before she walked the runway for the Go Red for Women Red Dress Collection fashion show in New York onThursday.

Ross said she was excited to participate in the American Heart Association’s fun and glamorous event because it was for a good cause — raising awareness about women’s heart health.

“I’m a character actress. I was a mother figure,” she explained. “Now, I’m a grandmother and a great-grandmother type. Because I eat so well, I’ve kept all my marbles and I try to keep in shape. I’ve always been plump all my life, but I’ve always been strong. … Our generation is living past our parents and I think it’s got to be the tremendous attention that is placed on our health and the pure responsibility of looking after your heart. It’s not just what you were born with.”

Best known for her portrayal of warm and wise Marion Cunningham on “Happy Days,” Ross said she has remained close with her former castmates from the show and planned to reunite with some of them this weekend to support their co-star — and Oscar-winning filmmaker — Ron Howard at a memorial for his dad Rance, who died in November.

“We have that legacy,” Ross said of how she and her “Happy Days” family built something together of which they can remain proud to this day.

“I just talked to the Fonz last week,” she added, referring to Henry Winkler, who played Arthur Fonzarelli on the series. “Ron is… finishing his movie [Solo: “A Star Wars Story”] but he will be here for his father’s funeral.”

Co-starring Don Most, Anson Williams and the late Tom Bosley, “Happy Days” is a family sitcom that initially aired 1974-84 and remained popular in re-runs for decades. Many of its actors also attended a memorial in May 2017 for their former cast-mate Erin Moran. 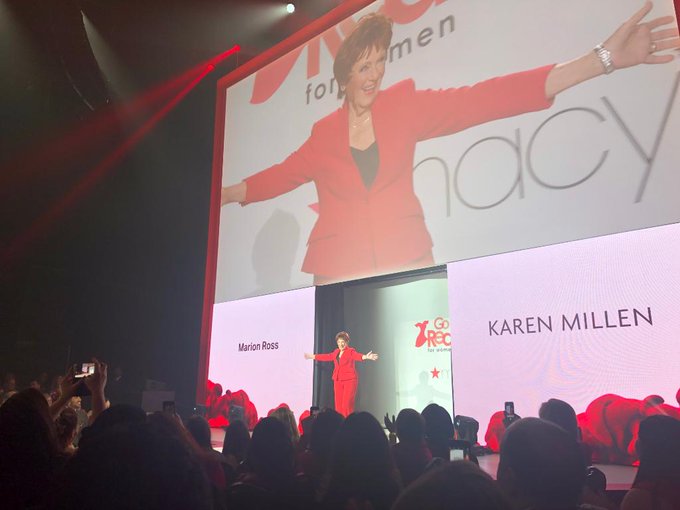 Marion Ross lost both her mother and father to heart disease. She’s rockin’ this red suit in their honor! #RedDressCollection presented by @Macys