LOS ANGELES, Aug. 21 ( Ben Hooper ) — A European Space Agency astronaut famous for wearing her Star Trek uniform on the International Space Station is headed “where no man has gone before” in a fan film.

Samantha Cristoforetti, the first Italian woman in space, returned to Earth in June after 199 days on the ISS and the makers of fan-produced film Star Trek: Axanar have now announced she is joining the production in an as-yet unspecified role.

“As long as we can work out her schedule (as she will have to fly back from Europe), [she] would love to have a role in Axanar,” the film’s producers said in a blog post.

Cristoforetti’s affection for the science fiction franchise became clear in April, when she donned a Star Trek: Voyager-style uniform and snapped a series of selfies aboard the ISS.

Star Trek: Axanar is a fan-produced film following the character Garth of Izar, who appeared in original Star Trek episode “Whom Gods Destroy.” The fan film takes place about 21 years before the first episode of Star Trek.

Cristoforetti’s journey “where no man has gone before” follows in the footsteps of NASA astronaut Mae Jemison, who appeared in a small role on Star Trek: The Next Generation.

Cristoforetti previously made headlines by brewing the first espresso in space andfilming a video showing how astronauts go “number two” aboard the ISS. 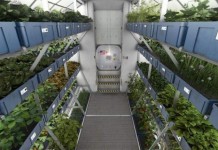