TMZ said the elder Margera has been battling kidney and liver ailments for several years, and has been in a coma since last month.

The exact cause of his death was not immediately disclosed. 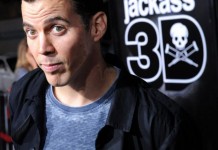