May 13 (UPI) — Jason Bateman says he has signed on to appear in a fifth season of his quirky comedy “Arrested Development.”

Netflix has not yet confirmed the show’s renewal for a fifth season. 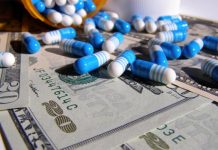