Trebek made the news known by way of a video posted on social media.

The 78-year-old celebrity is vowing to fight the disease and says he will continue to work on upcoming episodes of “Jeopardy.”

Trebek has been hosting the show since 1984.

The Ontario, Canada native began his career in 1961 working as a newscaster for the Canadian Broadcasting Corporation, but ultimately gained popularity hosting a live music show, followed a gig on the TV quiz show “Reach for the Top.”

Trebek recently signed a three-year contract renewal which would take his through the 2022 “Jeopardy” season. 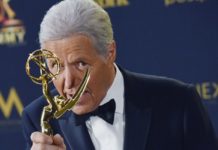