Playbill said Zackary Grady wrote and will co-star in the movie, which is now being filmed in Massachusetts.

Also featuring Max Dowden, Meredith Holzman, Marisol Sacramento, Nik Sadhnani, the film is about a teen hockey player on his way to an important tryout when he gets stuck on a ferry boat with a captain determined to attend a festival celebrating a famous cinematic shark.

“Me & @TheRealDratch are ON A BOAT,” Ferguson tweeted Tuesday, along with a link to the story about the casting news. 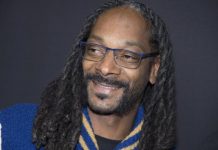