LOS ANGELES, March 29 (UPI) — The surprise relationship between Jessica Lowndes and Jon Lovitz was a hoax to promote the singer’s latest music video for her single, “Deja Vu (Remix).”

Released Monday, the steamy video features Lowndes and Lovitz as a couple with the former “90210” star constantly showing her affections for the “Saturday Night Live” alum.

Lowndes confirmed the hoax to Us Weekly and how the elaborate ruse was used to drive up interest for the new music video.

“Jon and I met in Hawaii last year when we worked together on ‘Hawaii 5-0.’

“I fell in love with his humor and comedy so when I was looking for someone to be a part of my ‘Deja Vu (Remix),’ which is a nod to the ’80s ‘Mystery Science Theater 3000’ and ’90s ‘Pop Up Video,’ he was the first person to come to mind,” she continued.

The social media prank, which took place Sunday between the duo, caused a media frenzy as fans and observers bought into the fake relationship.

“Easter with my bunny, @jessicalowndes!!!” Lovitz captioned a photo on Twitter at the time while Lowndes claimed to have a new man on Instagram.

The revealing video with is filled with funny pop-up facts about the actors and ends with a twist showing that a bed-ridden Lovitz was only imagining his sexy relationship with Lowndes, who is actually his nurse. 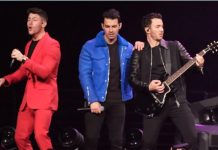