The 45-year-old actor posted about the bash on Instagram Thursday, a day before Cuoco’s 33rd birthday.

Parsons shared a photo of a pink cake reading “Happy Birthday Kaley” on the Big Bang Theory set. He tagged Cuoco in the caption, alerting the actress of his post.

Parsons followed up with a picture of Cuoco’s reaction to him spoiling the surprise.

“oops @kaleycuoco,” he captioned the snapshot, which shows an annoyed Cuoco holding her phone open to Parsons’ original post.

Parsons and Cuoco play Sheldon and Penny on “The Big Bang Theory,” which is in its 12th and final season on CBS. Cuoco discussed the decision to end the show in an interview with “The Late Late Show” in September.

“It was definitely tough,” the star said. “There was not a dry eye in the room, a lot of hysterical sobs.”

“It wouldn’t have mattered when it ended, we all would have been completely devastated,” she added. “It’s time now, I guess, to move onto other things, which is so heartbreaking.” 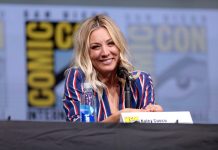 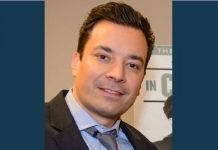