Cho will play Andrew Kim, “a former child psychologist who runs a group home for five at-risk foster children on a secluded private island off the coast of Seattle,” TVGuide.com reported.

TVLine.com said Season 1 Catholic priests played by Alfonso Herrera, Kurt Egyiawan and Ben Daniels will be called upon to help Kim when one of the children in his care becomes possessed by a demon.

Season 1 of the supernatural show was set in Chicago and starred Geena Davis as the adult version of Regan MacNeil, the bedeviled girl Linda Blair played in the classic 1973 film “The Exorcist.” Alan Ruck portrayed Henry Rance, the husband of Regan, who later changed her name to Angela, while Hannah Kasulka and Brianne Howey played the couple’s daughters Casey and Katherine.

When Casey began exhibiting violent, bizarre behavior, her mother enlisted clergymen to save her, eventually giving the family a happy ending and freeing the priests up to take on a new case by the season finale. 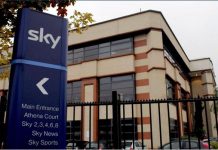