He added that Weinstein is not trying to avoid trial and said Los Angeles County could conduct a virtual arraignment.

The former movie producer is serving a 23-year prison sentence at Wende Correctional Facility, a maximum-security prison near Buffalo, N.Y., after he was found guilty of first-degree criminal sexual act and third-degree rape last year.

Effman had challenged the transfer to Los Angeles to face those charges, citing Weinstein’s health.

“The reason he’s at Wende is it’s the regional medical center,” he said. “He’s in the middle of treatment right now.”

Erie County Assistant District Attorney Colleen Gable, however, countered that Los Angeles County had met the requirements for the transfer and Weinstein’s health could be attended to in Los Angeles. 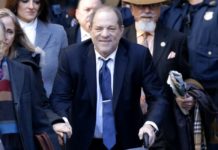