Nov. 3 (UPI) — Julianne Hough is moving forward with her divorce.

The 32-year-old professional dancer, who grew up in Utah, filed for divorce from her husband, former NHL player Brooks Laich, Monday in Los Angeles, according to TMZ.

The news comes five months after Hough and Laich first announced their split. The pair appeared to be reconciling in recent months but ultimately called it quits.

“They were trying to work on things but Julianne realized she’s happier having her freedom,” a source told People.

E! News said Hough is “still having a hard time” with her decision to file for divorce.

“[She] ultimately decided her heart wasn’t in the marriage anymore and wanted to give herself the freedom and independence to experience new things,” an insider said.

Hough shared a photo from a horseback ride Monday on Instagram.

“Happy Monday y’all,” she captioned the post. “Anyone else feeling the anxious energy this week?! If so, what self care actions are you taking to care for yourself? Also… VOTE.”

In May, Hough and Laich confirmed they were separating after nearly three years of marriage.

“We have lovingly and carefully taken the time we have needed to arrive at our decision to separate,” the pair said in a joint statement.

“We share an abundance of love and respect for one another and will continue to lead with our hearts from that place. We kindly request your compassion and respect for our privacy moving forward.”

Hough competed as a pro in five seasons of “Dancing with the Stars.” She has since served as a judge in “America’s Got Talent” Season 14. 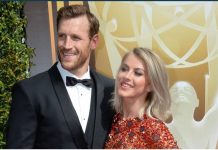