The 59-year-old actress praised Steinem, 86, while discussing her new film “The Glorias” during Monday’s episode of “Today.”

“The Glorias” is a biopic about Steinem’s life based on her book “My Life on the Road.” Moore, Alicia Vikander, Lulu Wilson and Ryan Kira Armstrong play Steinem at different ages in the film.

“The best part of this job was getting to spend the time doing the research on her, reading her books, watching her television appearances and listening to her voice,” Moore said of Steinem on “Today.” “I admire her so very much.”

Moore said she learned a lot about Steinem, a feminist and social activist, as she prepared for the film.

“I think the most impressive thing about Gloria is her thoughtfulness and her perseverance, her patience,” she said. “What’s so wonderful about her is how she constantly pushes forward. She never, ever stops.”

“She’s never rash. She’s not reactive. She really takes in a situation and assesses it, explains it for us all, and starts to change it for the better,” she added.

Moore confirmed that playing Steinem was a “big responsibility” but said she felt less intimidated since she was sharing the role with Vikander, Wilson and Armstrong.

“In that sense, we could kind of be this idea of ‘Gloria,’ where she was at certain points in her life, so we didn’t have to be this very strict one version,” she said.

Moore said she spent time with Steinem during rehearsals and was also invited to the activist’s house.

“I had her read some passages for me because I wanted to get the cadence of her voice,” she said. “I’ll never forget that.”

Roadside Attractions shared a teaser trailer for “The Glorias” this month that references Steinem’s work with the women’s rights movement of the 1960s and her early years at Ms. magazine.

“The Glorias” is directed by Julie Taymor (“Frida”) and co-stars Bette Midler, Janelle Monáe, Lorraine Toussaint and Timothy Hutton. The movie will be released Sept. 30 on Amazon Prime Video and other VOD platforms.

in August, Steinem discussed the importance of voting during a Makers Women conversation with Meghan Markle. 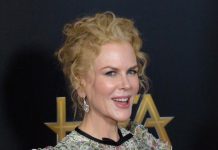 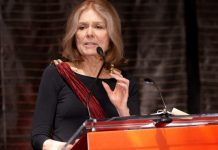 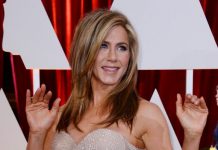