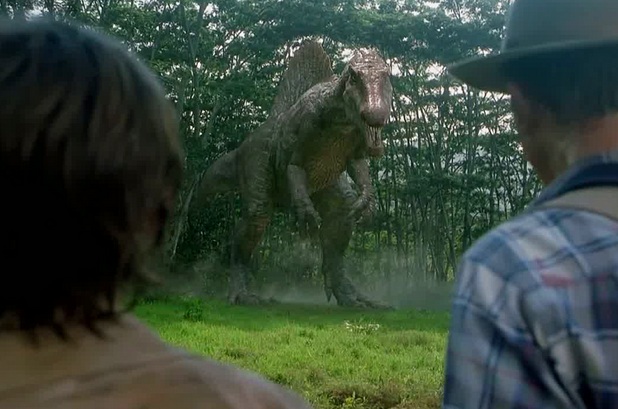 It’s back, and it’s bigger than ever. [/one_fourth][three_fourth_last] This is the first film in the series not to feature Sam Neill, Laura Dern or Jeff Goldblum. This was a creative decision by director Colin Trevorrow: “I know a lot of fans want to see the original characters back. They’re iconic. But I respect those actors too much to shoehorn them into this story for my own sentimental reasons. Jurassic Park isn’t about the bad luck of three people who keep getting thrown into the same situation. The only reason they’d go back to that island is if the screenwriters contrived a reason for them to go.” The new film stars Chris Pratt, Bryce Dallas Howard and Vincent D’Onofrio.

According to Trevorrow, there will be a statue of the character John Hammond, the founder of the InGen genetic company and Jurassic Park, as a means to specifically honor Sir Richard Attenborough who played the role in “Jurassic Park” (1993) and “The Lost World: Jurassic Park” (1997). Attenborough had spoken in the past of possibly making another appearance in the franchise but his failing health made it highly uncertain. Unfortunately, Attenborough passed away August 24th, 2014.