Antle, who is also an owner of Myrtle Beach Safari and founder and director of The Institute for Greatly Endangered and Rare Species, is accused of trafficking lion clubs between Virginia and South Carolina.

Herring investigated for months the relationship between Antle and Keith Wilson, the owner of Wilson’s Wild Animal Park, a “roadside zoo,” in Frederick County, and found that both men trafficked lion cubs between Virginia and South Carolina.

In November, Herring announced that the grand jury in Frederick County indicted both Wilson and his nephew Christian Dall’Acqua on 46 counts of animal cruelty.

The trial date for Wilson and his nephew’s case has been set for June 21-25.

Antle has violations dating back to 1989 when the U.S. Department of Agriculture fined him for abandoning deer and peacocks at his zoo in Virginia. He has racked up more than 35 USDA violations over the years for mistreating animals, The Post and Courier reported.

He rebuffed fallout from being on the Netflix’ series Tiger King: Murder, Mayhem and Madness, along with central character, Joseph Allen Maldonado-Passage, better known as Joe Exotic, a zoo operator and convicted felon, and accusations that he mistreated animals, according to the daily newspaper.

“That’s not a documentary,” Antle told The Post and Courier in March. 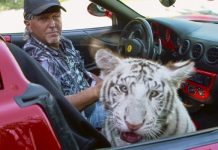