The “Stronger” singer made the unexpected announcement on stage during an L.A. concert in Piece by Piece tour.

“I was not planning on announcing this, but … I’m totally pregnant,” she said at the time, while crying onstage. “That was not planned. I just didn’t want you to think I was crazy. Honestly, I’m just hormonal today. Nothing’s wrong. I’m OK. I haven’t vomited yet!”

But now the American Idol alum took to Instagram to reveal the sex of her baby-on-the-way. 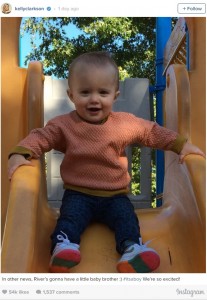 Back in February, Clarkson told People magazine how she wanted to expand her family.

“I want another one … But I’m just a little frightened because [River is] so perfect,” she said. “I feel like something horrible’s gonna come out of me. Because she’s so great — like, the yin to her yang … But I won’t put that out there. I’m gonna project happiness.”

It seems that Clarkson certainly put her fears aside. The singer is still making waves in music, collaborating with X Factor winner Ben Haenow for his new single “Second Hand Heart.” The music video for the song dropped earlier this week. 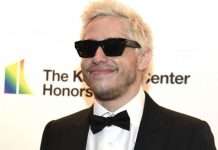