Nov. 22 (UPI) — An arbitrator ordered actor Kevin Spacey to pay nearly $31 million to the studio that developed Netflix’s “House of Cards” after he was fired from the show following multiple allegations of sexual misconduct, court filings revealed Monday.

Spacey, who starred in the show’s lead role, and his production companies M. Profitt Productions and Trigger Street productions, were ordered to pay the studio, MRC, $29.5 million in damages, $1.2 million in attorney’s fees and $235,000 in additional costs after an arbitrator found he breached his contract by violating the company’s sexual harassment policy.

The arbitrator ordered Spacey’s company to make the payments last year. The information was revealed when MRC filed a petition Monday in Los Angeles Superior Court to confirm the arbitration award after it was upheld in a confidential appeal.

“MRC stood its ground, pursued this case doggedly, and obtained the right result in the end,” the studio’s lawyer, Michael Kump, said according to CNBC.

MRC severed its relationship with Spacey in 2017 and scrapped the sixth and final season of “House of Cards” before rewriting it without Spacey’s character and running the season with a reduced episode count.

The studio later filed an arbitration action against Spacey, claiming he cost the production tens of millions of dollars because of his behavior.

“The safety of our employees, sets and work environments is of paramount importance to MRC and why we set out to push for accountability,” MRC said in a statement Monday.

Spacey has faced several lawsuits accusing him of sexual abuse, including one from actor Anthony Rapp that is still pending. Another plaintiff in the case was dropped over the summer after he chose to provide his full identity in the case. 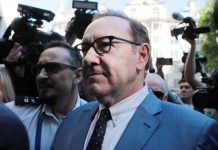