The photo shows Kardashian wearing the ring on the ring finger of her left hand. The reality star also sports a manicure with colorful tips.

Thompson responded in the comments with eyeball, heart-eyes and diamond emojis.

Kardashian and Thompson first started dating in 2016. The couple split in 2018 following rumors Thompson cheated and broke up again in 2019 after another cheating scandal.

Kardashian confirmed on Thompson’s birthday in March that they were back together.

“The ones that are meant to be are the ones who go through everything that is designed to tear them apart and they come out even stronger than they were before,” she wrote on Instagram.

Kardashian and Thompson have one child, daughter True, who turns three this month. The couple are hoping to have a second child.

Kardashian’s mom, Kris Jenner, said in an interview with “The Ellen DeGeneres Show” in March that she’s “really happy” about Kardashian and Thompson’s plans to have another baby.

“I think it’s so great that they want to do that again and have a sibling for True, because there’s nothing better than a big family, and brothers and sisters, and that’s just my heart,” Jenner said. “So I’m really happy.”

“I just want them to be happy. And True will be so excited,” she added.

“I think she just loves jewelry. She loves a good, you know, ring,” Jenner said. “You should ask Khloe that.”

Kardashian and her family star on the E! reality series “Keeping Up with the Kardashians,” which is in the midst of a 20th and final season. 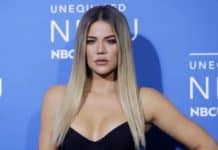