SEOUL, Sept. 5 (UPI) — A majority of South Korean people agree that the military service exemption should be allowed to its runaway-success boyband BTS, according to a survey conducted on behalf of UPI News Korea and the regional broadcaster KBC.

Out of 800 respondents aged 18 and older, 57.7% said that its seven male members should be exempted from the mandatory military service, while 39.8% opposed the idea.

All age brackets, except those in their 20s and 30s, saw the majority in favor of the proposal.

Among the people in their 20s, however, a whopping 63.9% of the male respondents opposed the idea, their stance being that BTS members, like all the others in their age group, should be held to their conscription duties.

All able-bodied South Koreans under the age of 30 are required to serve in the military for a minimum of 18 months in order to protect the country from outside threats including North Korea.

The oldest BTS member, Jin, turns 30 this December while other members are also approaching the age limit of the draft.

Partly in response BTS, the most successful boy band in history, announced earlier this year that its members would cease performing as a group and instead seek solo careers.

The survey result by and large dovetails with that of Gallup Korea poll from past April. That poll revealed almost 59% of 1,004 South Koreans then surveyed agreeing that BTS members should not have to serve in the military.

The latest survey is noteworthy in that it could serve as a predictive forerunner to the public opinion poll that the country’s Ministry of National Defense is planning with regard to BTS members’ eligibility for military exemption, an idea which was voiced by the Defense Minister Lee Song-sup during a parliamentary session Wednesday.

However, the ministry stepped back the following day, saying that the result of the opinion poll would not be the sole criterion in deciding the matter.

The survey was carried out by Next Week Research on behalf of UPI News Korea and Gwangju’s KBC. 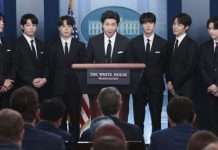