The 41-year-old Australian dancer announced in an Instagram post Monday that she’s pregnant and expecting a baby with the “Shark Tank” star.

Johnson posted a photo of a sonogram that appeared to show her unborn child giving a thumbs up. She did not share further details about the baby’s sex or due date.

“‘It’s a thumbs up,'” the star captioned the picture, adding a thumbs up and heart emojis.

Herjavec already shares three children, Brendan, Skye and Caprice with ex-wife Diane Plese. He and Johnson met during Season 20 of “Dancing with the Stars” in 2015, and married in Los Angeles in July 2016.

Johnson last competed as a pro in Season 24 of “Dancing with the Stars.” Herjavec, meanwhile, recently returned for Season 9 of “Shark Tank,” which premiered on ABC in October. 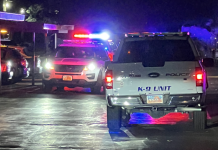