Los Angeles County Superior Court Judge Brenda Penny agreed to a petition from the 39-year-old singer’s lawyer, Matthew Rosengart, suspending her father from the conservatorship and appointing certified public accountant John Zabel to serve as temporary manager of her finances.

“The current situation is not tenable,” Penny said following a hearing Wednesday. “The situation is toxic. I believe suspension is in the best interest of the conservator.”

Vivian Thoreen, an attorney for Jamie Spears, called Zabel a “stranger” in the case and objected to the suspension.

Penny denied a request from Thoreen to reconsider the ruling, saying the ruling was unable to be appealed.

As a result of the ruling, Jamie Spears will be required to hand over all records to Zabel, who will control all of Britney Spears’ financial decisions while Jodi Montgomery, a licensed private fiduciary, will manage her day-to-day wellbeing and medical care.

“This suspension is directly what Britney wanted, she does not want Jamie in her life,” Rosengart said Wednesday.

Rosengart also requested that a hearing to end the conservatorship, currently scheduled for Dec. 31, instead be held within the next 30 to 45 days.

Jamie Spears last month filed to step down as the conservator of Britney Spears’ estate after 13 years and court hearings in the past three months in which she has accused her father of conservator abuse including using her estate and finances for his own benefit and exerting his status as conservator to control her career and personal life. 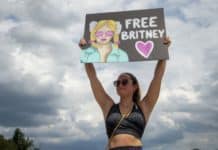