“It is with great sadness and a heavy heart that I inform you of the sad and unexpected passing of my dear friend, PR client & business partner, Lee Reherman,” his publicist Anthony Turk said in a statement.

“Your prayers are greatly appreciated at this very difficult time. Lee was loved by everyone who knew him, and he will never be forgotten.”

No cause of death has been announced however Turk noted that the television star was not “feeling well” after having hip surgery last month according to TMZ.

Reherman was known for his time on “American Gladiators,” a popular, athletic competition show from 1993-1996 where he competed under the name of Hawk.

With his impressive physique and charismatic attitude, Reherman was able to start a career in television afterwards appearing in episodes of “Jane the Virgin,” “X-Files,” “NCIS,” and most recently as Secret Service agent Ross Hardison on “The First Family.” 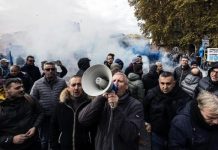