EAST HAMPTON, N.Y., Aug. 22 (UPI) — Leonardo DiCaprio and girlfriend Nina Agdal were unhurt in a car crash over the weekend.

The 41-year-old actor and 24-year-old model were traveling in a Range Rover in East Hampton, N.Y., Saturday afternoon when their vehicle was rear-ended by a woman driving a Mini Cooper, according to Page Six.

Witnesses said DiCaprio made sure Agdal was fine before climbing out of his car and checking on the other driver. He helped the woman out of her vehicle and stayed with her as they waited for police to arrive.

“She was shaken up,” a source said of the other driver. “He motioned for her to come with him, and he helped her over to the guardrail so she could rest.”

DiCaprio, Agdal and the woman all appeared to be uninjured, although an ambulance arrived as a precaution. The actor’s Range Rover was relatively unscathed, but the Mini Cooper had “extensive” front-end damage and had to be towed.

“All are doing great,” an insider told People magazine after the crash.

DiCaprio and Agdal were first linked in July after they were spotted getting close during a romantic beach day in Malibu, Calif. The actor, who last appeared in “The Revenant,” is producing a number of projects, including Ben Affleck‘s film “Live by Night.” 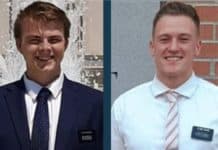