LOS ANGELES, Nov. 30 (UPI) — Lin-Manuel Miranda will serve as producer and “musical mastermind” on an adaptation of “The Kingkiller Chronicle.”

The 36-year-old “Hamilton” creator confirmed the news Tuesday on Twitter after Lionsgate announced he will produce and compose a film and TV series based on the Patrick Rothfuss fantasy book series.

“I just love the world of @PatrickRothfuss and I want to spend time figuring out how to share it with you. So this is happening,” Miranda tweeted to his 1.02 million followers.

Rothfuss will serve as executive producer on both the movie and TV projects, with Lindsey Beer (“Dungeons & Dragons”) as screenwriter. Lionsgate Motion Picture Group co-president Erik Feig said in a press release that the simultaneous adaptations will best service Rothfuss’ “unique and ambitious view.”

“Lin is an incomparable talent and a huge fan of the trilogy and, working closely with Pat, his creative oversight of the franchise will bring an incredible level of detail and continuity to all of the projects,” he said.

“Lin-Manuel Miranda is a creative genius and Pat Rothfuss has fashioned a world that is rich in intrigue and detail, which perfectly lends itself to a high-end television series that can more thoroughly explore characters and concepts that the books have only teased,” Lionsgate Television Group chairmain Kevin Beggs added.

“The Kingkiller Chronicle” consists of “In the Name of the Wind,” “The Wise Man’s Fear” and “The Doors of Stone,” the last of which has yet to be released. The film series will be closely based on the trilogy, while the TV show will expand on “the world outside of the books.”

“Pat Rothfuss’ “Kingkiller” books are among the most read and re-read in our home. It’s a world you want to spend lifetimes in, as his many fans will attest. Pat also writes about the act of making music more beautifully than any novelist I’ve ever read. I can’t wait to play a part in bringing this world to life onscreen,” Miranda said.

“There is no living human being I would rather have a creative collaboration with,” Rothfuss lauded of the composer. “There are no words that can express how excited I am.”

“The Kingkiller Chronicle” follows Kvothe, a renowned musician who recounts his past for the Chronicler, a scribe who meets the character in the present. “In the Name of the Wind” and “The Wise Man’s Fear” largely explore Kvothe’s past. 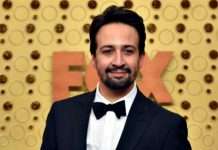