The women’s rights activist and author will develop dramas, comedies, documentaries, animation and children’s shows that draw on Yousafzai’s ability to inspire.

Yousafzai is best known for her memoir “I Am Malala,” documentary film “He Named Me Malala” and for starting the Malala Fund, which fights for every girl’s right to a safe and quality education.

She was awarded the Nobel Peace Prize in 2014, making her the youngest Nobelist in history. Yousafzai became a household name after Taliban militants shot her in the head in Pakistan for speaking out on education for girls.

Apple, in 2018, became Malala Fund’s first Laureate partner. Yousafzai and Apple have also collaborated on Assembly, a digital publication for girls and young women that is available on Apple News.

“I believe in the power of stories to bring families together, forge forge friendships, build movements and inspire children to dream. And I couldn’t ask for a better partner than Apple to bring these stories to life. I’m grateful for the opportunity to support women, young people, writers, and artists in reflecting the world as they see it,” Yousafzai said in a statement. 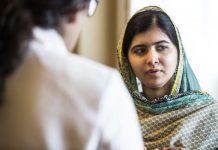 Malala returns to Pakistan for first time since assassination attempt