May 20 (UPI) — Prosecutors in Los Angeles on Thursday charged the man who allegedly rushed comedian Dave Chappelle on stage last month with attempted murder on accusations that he stabbed his roommate in December.

Lee is accused of stabbing his roommate Dec. 2 during a fight at a transitional housing apartment.

The 23-year-old is also facing multiple misdemeanor charges on allegations he attacked Chappelle while he was performing at Los Angeles’ Hollywood Bowl in early May.

Gascon’s office said the victim of the December assault had reported the attack to police after it occurred but only identified Lee as the suspect due to media coverage of the incident involving the comedian.

“The publicity generated by the attack on Mr. Chappelle helped police solve this crime,” Gascon said in a statement. “The incident that occurred at the Hollywood Bowl was misdemeanor conduct and rightfully referred to the city attorney’s office. Based on the nature and severity of the December attack, Mr. Lee is now facing felony charges, which my office will prosecutor.”

Lee is scheduled to return to court June 2 and the case remains under investigation.

Early last month, Gascon declined to file felony charges against Lee over the Chappelle incident and referred the case to the Los Angeles City Attorney’s Office who charged him with battery, possession of a weapon with intent to assault and two charges related to interfering with a performer.

According to police, Lee was carrying a replica pistol and a folding knife when he allegedly tackled Chappelle, though he reportedly did not brandish the weapons during the incident. 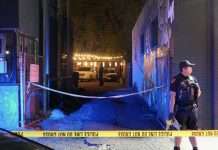