The 41-year-old French actress admitted at a press conference Sunday that it was “so weird” to film an intimate scene with the 52-year-old American actor for the WWII drama.

“We rehearse and had a very determined choreography, and then it allows you freedom. When you know exactly what your body will do, then you can act and you can be free to give the emotions and give the feelings because you won’t think, ‘What am I going to do next? Am I going to go on top of him?'” Cotillard said.

“It’s an awkward situation,” she confessed. “We laughed because you need to get it out because this is so weird. And so you get this time of looking at each other and saying, ‘Okay, this is so weird.’ And then we go into this and then I’m going on top of you and then we are going to kiss.”

“Allied” stars Pitt as a Canadian intelligence officer whose French resistance fighter wife (Cotillard) is later suspected of being a German spy. Cotillard had nothing but praise for her co-star in an interview with “Entertainment Tonight” last week.

“[Brad is] such a good man,” she gushed. “Of course he’s an amazing actor. He’s such a good person that it’s really not difficult to get along with him.”

“Sometimes you have nothing in common, no chemistry, and it still works on screen,” the star added. “You have many different situations, but we had this chance to have this period of time to get along together [during rehearsals], so it helps.”

Cotillard had denied in September that she and Pitt had an affair during filming. The actor’s wife, Angelina Jolie, filed for divorce Sept. 19 after two years of marriage and a decade together. 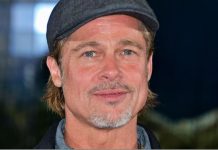