Dec. 27 (UPI) — Mark Hamill paid tribute to Carrie Fisher on Twitter Wednesday, on the one year anniversary of her death.

“No one’s ever really gone…#AlwaysWithUs #CarrieOnForever,” Hamill said alongside a collection of photos of the “Star Wars” stars posing together.

The photos included shots of Hamill and Fisher during their time starring in the original “Star Wars” trilogy of films that began with 1977’s “A New Hope” and a shot of the pair embracing each other in character as Luke Skywalker and General Leia from the recently released latest entry in the series, “The Last Jedi.”

Hamill also posted a painting of Fisher sticking up her middle finger while holding her dog Gary.

Hamill recently made headlines for admitting that he and Fisher would make out while on the set of “A New Hope.”

Fisher died at the age of 60 in December 2016 following a heart attack. She was able to complete her scenes for “The Last Jedi” before her death, but will not appear in the forthcoming “Star Wars: Episode IX.”

“Star Wars” actor John Boyega, when discussing Fisher in “The Last Jedi,” said that her final appearance is a proper farewell to the character.

“It sends her off in a very amazing, amazing way,” he previously said. “And she’s still kept alive in this franchise. That’s the beauty of it — she lives forever in a sense.” 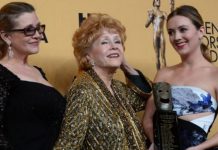 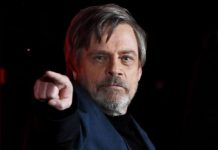