“The new series, Marvel’s Spider-Man, tells the story of an unsure — but courageous — teen who has to figure out how to be a super hero from the very beginning,” a press release noted.

“We’ve been secretly nurturing “Marvel’s Spider-Man” for years now, so we are thrilled to finally announce it. The simple title reflects a back-to-basics approach — the story of an ordinary teen, Peter Parker, who suddenly finds himself with strange new powers and overwhelming responsibility. And thanks to story editor Kevin Shinick and supervising director Philip Pignotti, it’s just filled with heart and humor,” Cort Lane, senior vice president of Marvel Animation and Family Entertainment, said in a statement.

“Spider-Man is the biggest action hero in the world. He is an iconic character whose duality makes him both relatable and aspirational for the Disney XD audience,” added Marc Buhaj, senior vice president of programming and general manager of Disney XD. “We’re thrilled to continue our partnership with Marvel in this new original series that offers a fresh take on a beloved classic that will engage both new and existing Spidey fans with its compelling drama, exciting action and the signature sense of comedy.” 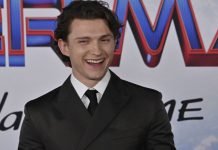