The network announced Tuesday at the Television Critics Association summer press tour that Rudolph will play Ralphie Parker’s mom in its musical adaptation of the 1983 film, according to Entertainment Weekly.

The three-hour live event will air Sunday, Dec. 17 at 7 p.m. ET on Fox. The network said it will announce additional casting “soon,” including the role of 9-year-old protagonist Ralphie Parker, according to Variety.

The original “Christmas Story” starred Peter Billingsley as Ralphie Parker and Melinda Dillon as Ralphie’s mom. The movie was adapted as “A Christmas Story: The Musical” in 2009, and debuted on Broadway in 2012.

Rudolph is known for her work with Saturday Night Live, and has since appeared in the films “Grown Ups,” “Bridesmaids” and “Sisters.” She will also star in the movie “Life of the Party” with Melissa McCarthy. 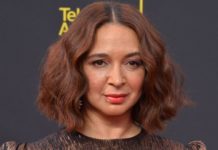