Spencer plays Emily, a scientist who develops a formula to give people superpowers. McCarthy plays Lydia, a friend who injects herself and gains super strength. Emily gains the power of invisibility.

Emily and Lydia become Thunder Force and try to save the city, but their new powers aren’t foolproof. Emily appears beside a convenience store robber (Ben Falcone) and tasers him, but freaks out over the extent of the shock.

Lydia fights a villain (Bobby Cannavale) who complains about the smell of her hero costume. Both have trouble getting out of their car, but Lydia can do flips atop a moving car and throw a bus across several city blocks.

Jason Bateman plays a supervillain with crab claws and Pom Klementief plays another who can shoot projectile beams. 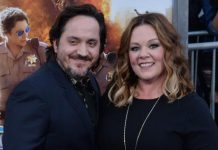