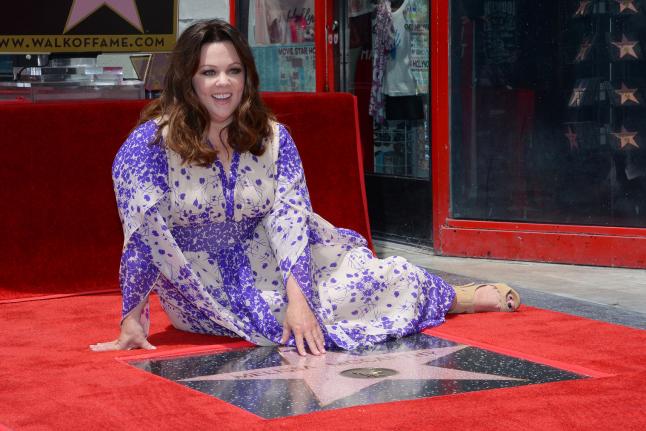 LOS ANGELES, May 20 (UPI) — Melissa McCarthy was honored with a star Tuesday on the Hollywood Walk of Fame.

The 44-year-old actress received the plaque in recognition of her contributions to film. McCarthy came to fame as Sookie St. James on The WB series “Gilmore Girls” before starring in such comedies as “Bridesmaids”, “Identity Thief” and “The Heat”.

“Hollywood is thrilled to honor Melissa McCarthy with this coveted award,” Hollywood Chamber of Commerce president Leron Gubler said. “Her ability to portray unique, unforgettable and exuberant characters sets her apart. She is one of America’s favorite comedic actresses and very deserving of this honor!”

McCarthy’s husband, actor and director Ben Falcone, “Bridesmaids” and “The Heat” director Paul Feig, and “The Ellen DeGeneres Show” host Ellen DeGeneres were on hand to honor the actress. McCarthy and Falcone wed in 2005, and have two daughters, Vivian and Georgette.

McCarthy will next appear in new Paul Feig comedy Spy with Jason Statham. The actress is also scheduled for a number of other projects, including an all-female “Ghostbusters III” withKristen Wiig and Ben Falcone-directed comedy “Michelle Darnell”.