April 6 (UPI) — The MTV Movie & TV awards will no longer feature separate categories for male and female actors — and will add TV and streaming categories.

The new divisions have “Get Out”‘s Daniel Kaluuya competing directly with Emma Watson for her role as Belle in “Beauty and the Beast” in the “Best Actor in a Movie” category as voting for the award show opened on MTV’s website.

MTV’s annual awards will also include categories dedicated to television and streaming for the first time, including the female dominated “Best Actor in a Show” category, which features Emilia Clarke from “Game of Thrones,” “Stranger Things”‘ Millie Bobby Brown, “Jane the Virgin”‘s Gina Rodriguez and Mandy Moore from NBC’s drama “This is Us” nominated alongside Donald Glover for his on-screen role in “Atlanta” and “The Walking Dead”‘s villain Jeffery Dean Morgan.

Jordan Peele’s horror smash hit “Get Out” led all nominees with six total nominations including Best Movie and Kaluuya’s nomination for Best Actor.

“Beauty and the Beast” and “Stranger Things” tied for second with four total nominations while “Atlanta,” “Game of Thrones,” “Hidden Figures,” “Logan,” “Moonlight” and “This Is Us” each received three nominations.

Actor and comedian Adam Devine of “Workaholics” will host the May 7 award show at the Shrine Auditorium in Los Angeles. 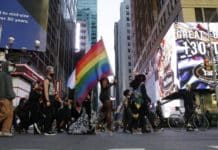