Sophia Bush, Daphne Zuniga and Paul Johansson were among the other stars who gathered for drinks and fun. The former co-stars delighted fans by documenting the reunion on social media.

“One Tree Hill” ran for three seasons on The WB, and moved to The CW for a six-season run from 2006 to 2012. The show is set in the titular, fictional North Carolina town of the same name, and follows two half-brothers (Murray and Lafferty) from high school and beyond. 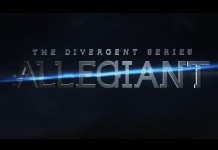 Sunday Spotlight: Chatting With The Cast Of ‘Divergent: Allegiant’