The national police said they arrested Victor Hugo Gomez, the alleged mastermind of the June 9 shooting in Santo Domingo, Dominican Republic, and Alberto Rodriguez Mota, the man accused of paying for the shooting.

The gunman, whom police arrested earlier this month, allegedly told officials he got confused inside the nightclub where he shot Ortiz on June 9. Ortiz and Fernandez were sitting together at a table at the moment of the shooting.

Police said Gomez targeted Fernandez, his cousin, because he blames him for turning him in to authorities in a drug case.

The federal police said they captured Mota at sea while he attempted to escape to Puerto Rico. Mota allegedly paid $8,000 for the hit.

Police have arrested more than a dozen suspects in the plot.

Immediately after the shooting, Ortiz underwent surgery in the Dominican Republic before the Boston Red Sox chartered a plane to send him back to Boston for further treatment. His wife, Tiffany Ortiz, said doctors moved him out of the intensive care unit at Massachusetts General Hospital on Saturday. 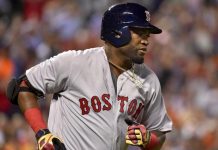