Oct. 12 (UPI) — Britain’s Princess Eugenie has married her longtime beau Jack Brooksbank at St. George’s Chapel at Windsor Castle and the newlyweds will soon ride through town in a horse-drawn carriage to wave to well-wishers.

The couple got engaged in January after several years of dating.

Eugenie’s sister Beatrice, wearing an outfit by Ralph and Russo and a hat by Sarah Cant, served as her maid of honor and The Rt. Revd. David Conner officiated the service.

Princess Eugenie’s wedding gown has a fitted bodice and pleated skirt, the royal family’s press department confirmed. Created by Peter Pilotto and Christopher De Vos, the dress features a neckline that folds around the shoulders to a low back that drapes into a flowing full-length train.

The princess also is wearing the Greville Emerald Kokoshnik Tiara, lent to her by Queen Elizabeth II, her grandmother. It is made of brilliant and rose cut diamonds pavé set in platinum, with six emeralds on either side.

Conducted by Carlo Bernini, Andrea Bocelli and the Royal Philharmonic Orchestra performed at the wedding ceremony. 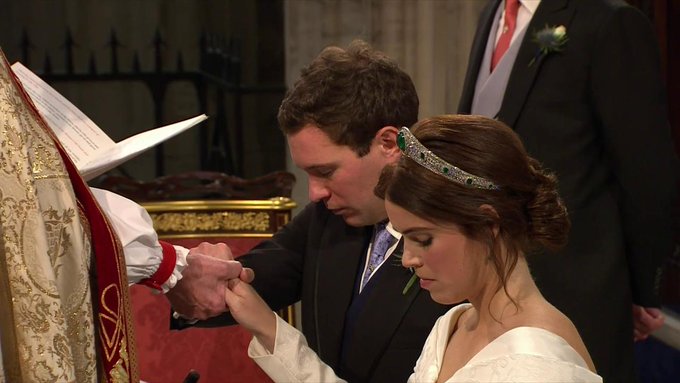 The Dean of Windsor joins the couple’s right hands together and proclaims them husband and wife. #RoyalWedding

The queen is planning to host a wedding reception for Eugenie and her new husband.

Eugenie is the younger daughter of the Duke and Duchess of York, Prince Andrew and Sarah Ferguson. She is the cousin of Princes William and Harry and is eighth in the line of succession to the British throne.

Harry married Meghan Markle at St. George’s Chapel in May.

In an interview to air Friday on ITV, Eugenie admitted, “It’s definitely creeping up on us now, the nerves,” but she said she had no intention of backing out.

“Never. It was love at first sight that’s why,” she said.

Brooksbank recalled how he and Eugenie were skiing at a friend’s place in Switzerland when they first spotted each other..

“Jack’s the kind of guy, you know when you’re lost at a party and you can’t find anyone to talk to, and you start panicking and you need help? He’ll walk in and make everyone feel so special,” Eugenie said. “He’ll scoop you up and talk to you and make you feel a million dollars.” 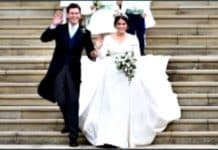 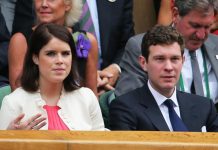 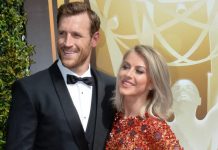