The Sovereign Grant given to the Queen is based on profits posted from the Crown Estate portfolio. The Crown Estate is made up of prime real estate, farms and coastlines that generate millions of dollars, which mostly end up in the British government’s control.

The British Treasury pays the Queen via the Sovereign Grant a percentage of the profits generated from the Crown Estate portfolio.

The Crown Estate received about $55 million in tax-free income in 2016. The Sovereign Grant, which for 2018-19 will increase by more than $7.5 million, pays for the salaries of the Queen’s household, security, official travel and upkeep of palaces.

Some of the money will be used to pay for a $470 million refurbishment effort at Buckingham Palace. Between 2017 and 2027, the British Treasury will increase Sovereign Grant payments from 15 percent to 25 percent to help pay for the restoration in bi-annual payments. 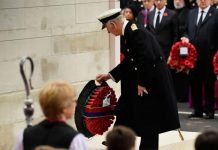