Sacha Baron Cohen was initially set to star in the long-gestating project, but he dropped out.

Mercury’s original band mates Brian May and Roger Taylor will serve as music producers on the film. 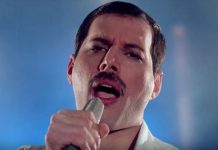 Freddie Mercury sings ‘Time Waits for No One’ in unearthed recording