May 31 (UPI) — “That’s So Raven” and “Raven’s Home” star Raven-Symone celebrated her recent 28-pound weight loss with an Instagram video this weekend.

“I’ve got a whole different face going on,” said the 35-year-old former co-host of “The View.” “You see my jawline right now? It looks like I have a neck.”

“You do! I don’t!” said Raven-Symone’s wife, social media manager Miranda Maday, who was sitting beside her in a car as the actress addressed the camera Sunday.

The couple said they are currently filming an exercise journey challenge and plan to unveil it soon on their social media platforms.

Raven-Symone also said she has been fasting and walking in an effort to shed her unwanted pounds. 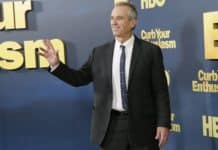